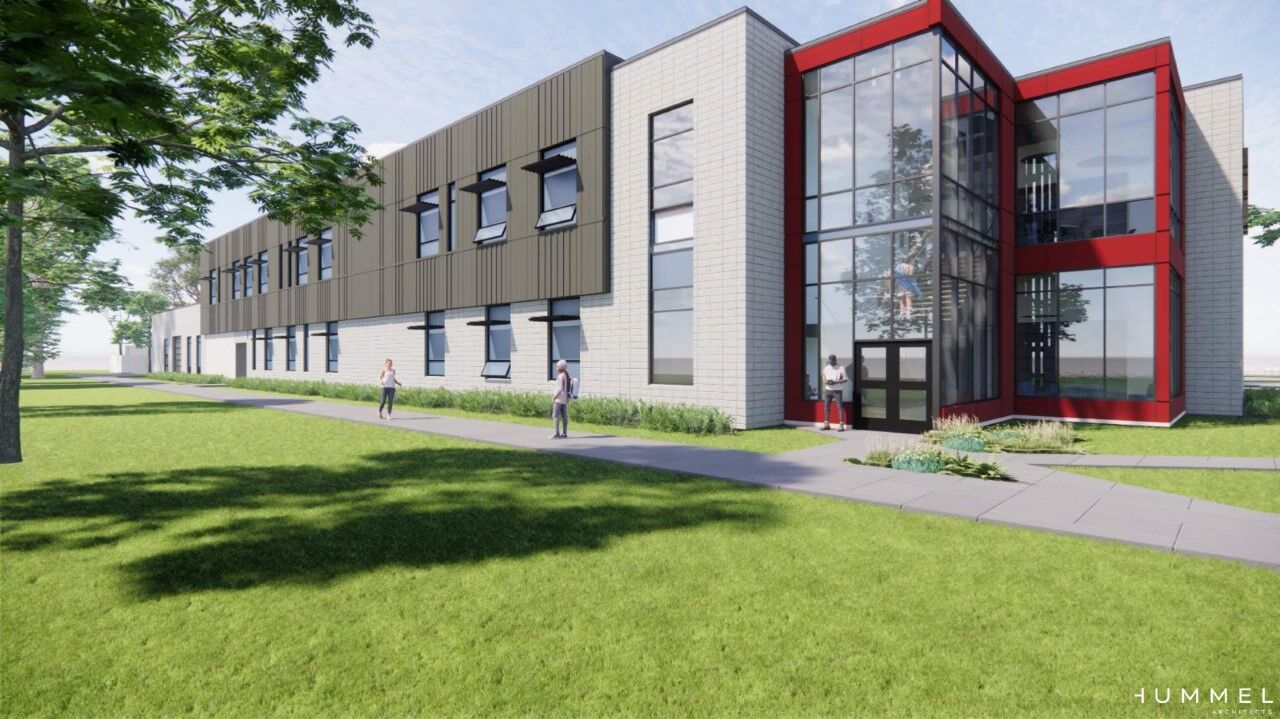 A rendering of the exterior of Alpine Academy, a new charter school for middle school students set to open in Chubbuck in 2023. Image courtesy of Big-D Construction

CHUBBUCK — One local charter school is embarking on a project that will bring it one step closer to providing a campus for K-12 students.

“I am so excited about this,” said Connor Academy Principal Joel Lovstedt. “We have been working so hard on this. This has been a long term goal of ours for quite some time. Eventually, we would like to have a high school, too, but this is a great first step.”

The groundbreaking event for the new school, estimated to cost $12 million to construct, is set for 3 p.m. Monday at 1195 Alpine Ave., which is located just next to Connor Academy off of Philbin Road.

Lovstedt said the new school is being funded via a moral obligation bond obtained from the Idaho Housing and Finance Association with help from Piper Sandler, a national investment banking company headquartered in Minneapolis.

The public is invited to attend the groundbreaking and Lovstedt said preliminary site preparation will begin immediately afterward.

Alpine Academy will be a two-story building with about 32,000 square feet of space. In addition to constructing the new school, the project involves connecting Alpine Avenue from Philbin Road to Hawthorne Road.

“This will allow more students to walk or ride their bikes to school and provide families with two exits instead of one,” Lovstedt said. “We are hoping to have that road extended by the end of this school year.” 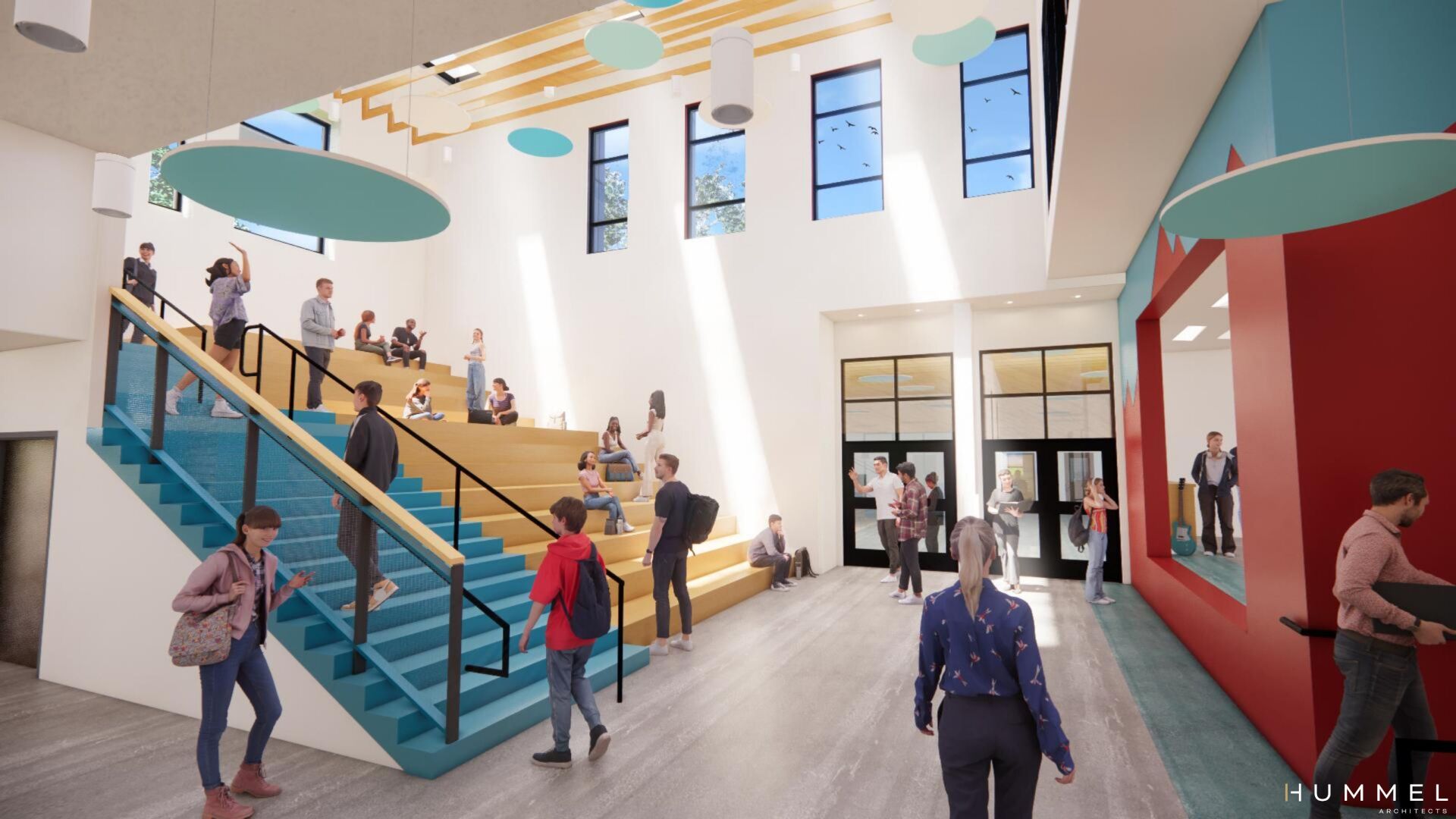 A rendering of the interior of Alpine Academy, a new charter school for middle school students set to open in Chubbuck in 2023. Image courtesy of Big-D Construction

Lovstedt said the goal is to have the school completed by July 15, 2023, which will provide officials with about three weeks to move equipment and materials into the new building.

Connor Academy first opened as Academy At Roosevelt Center in the former Roosevelt Elementary School on Maple Street in Pocatello in 2006. In 2015, the school moved to its current location at 1295 Alpine Avenue, located off of Philbin Road, and changed its name to Connor Academy.

The school got its name from a young autistic student who was diagnosed with cancer and attended the school for a year before passing away in 2008.

Lovstedt said the construction of Alpine Academy will be the first new school built in Chubbuck since Connor Academy opened there in 2015. The last middle school to open in the Pocatello area occurred in 2011-12 when the New Horizon alternative school moved out of what became Alameda Middle School and the building was re-designated as a middle school for students in grades six through eight.

To construct the new middle school, Connor Academy officials are working with Big-D Construction, which is headquartered in Salt Lake City but also has regional offices in Idaho Falls and Ogden, Utah.

Hummel Architects, a Boise-based firm, has been hired as the design and architectural team.

“Big-D Construction is honored for the opportunity to be part of a design-build project that allows us to work collaboratively with Hummel Architects and their design team to meet the expectations of Connor Academy and their goal to serve more students in the community,” Wolford said. 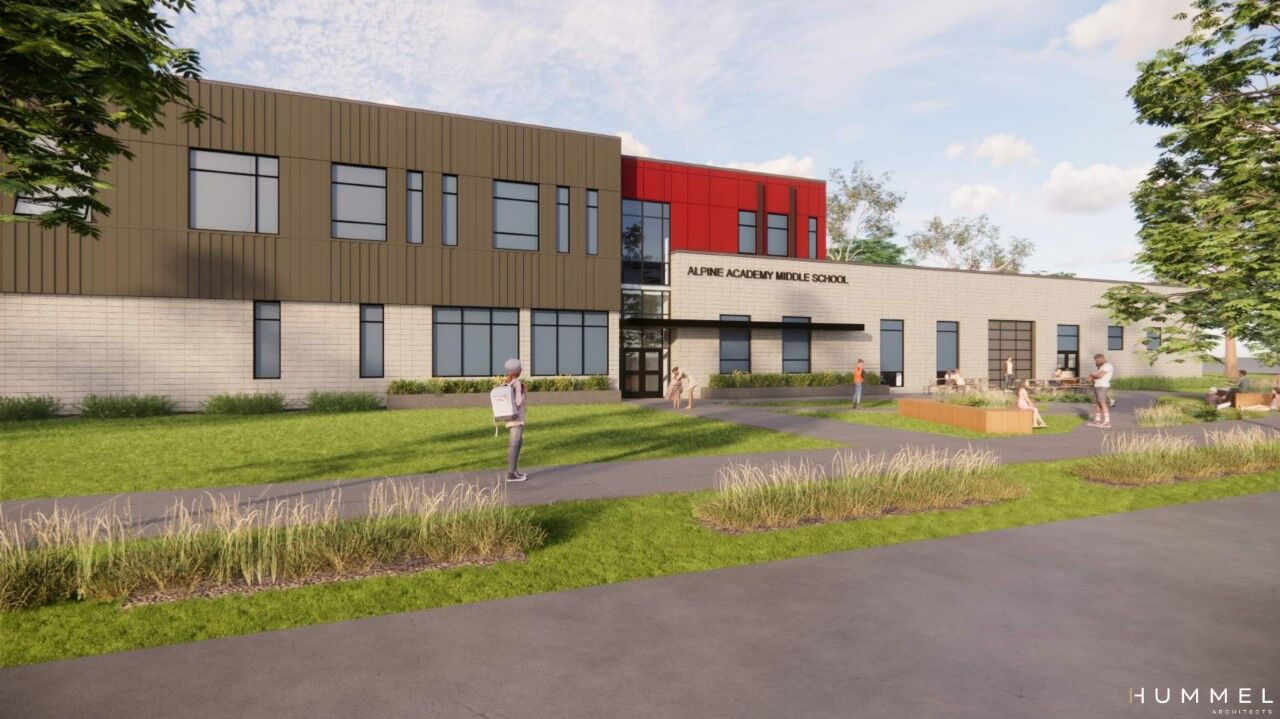 A rendering of the exterior of Alpine Academy, a new charter school for middle school students set to open in Chubbuck in 2023. Image courtesy of Big-D Construction

Lovstedt said what separates Connor Academy from other charter schools and even local public schools is its rigorous academic curriculum.

“Each one of the charter schools focus on a different type of student,” Lovstedt said. “There are some kids who do well everywhere and others that do especially well in certain environments. We seem to have a lot of success with kids who are looking for an academically rigorous curriculum and also kids who need a very structured environment.”

Additionally, Lovstedt said the educational needs for K-5 students differ from students in grades 6-8, adding that separating those two groups will be beneficial for both.

“Developmentally, middle school children require a little more of a specialized program than those in K-5,” Lovstedt said. “By splitting off and having a dedicated middle school we will be able to improve both programs. We can focus on some of the specific developmental needs of middle school students while also bolstering our K-5 program.”

Connor Academy currently educates about 540 students, said Lovstedt, adding that long waiting lists have in the past been discouraging to some families looking to enroll their students at the school. Connor Academy also boasts a very small turnover rate. Aside from the new kindergarten class every year, Lovstedt says only about two to four openings come up for higher grade levels every year.

With the addition of a dedicated middle school, however, Connor will be able to increase its classes from two for each grade level to three, which will open up over 30 additional student spots per grade level for the 2023-24 school year.

“We will be accepting about 300 new students once the new middle school has been completed,” Lovstedt said. “We will also be searching for about 10 to 11 new teachers and additional support staff.”