Airport has already eclipsed record for yearly number of passengers 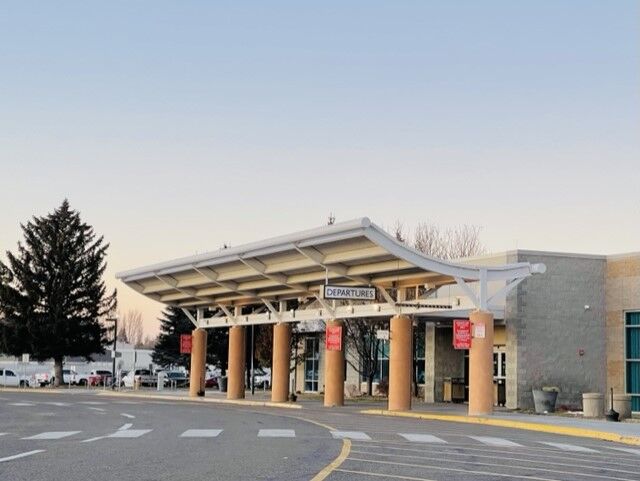 Idaho Falls Regional Airport officials expect new updates to the facility will help to prepare for more holiday traffic. The airport has already surpassed the amount of travelers it saw in 2021 and the number continues to rise. Ileana Hunter/hunter@postregister.com

Thanksgiving is Thursday, and while many travelers have already headed out, a significant percentage of people traveling to see family this holiday are departing Wednesday.

According to AAA, 54.6 million Americans, including nearly 312,000 Idahoans, will travel 50 miles or more from home this Thanksgiving this year, an increase of 1.5% from Thanksgiving 2021. The number of holiday travelers this year is expected to reach 98% of pre-pandemic volumes and is projected to be the third busiest for Thanksgiving travel since AAA started tracking in 2000, AAA said.

The majority of those travelers will be driving and, fortunately, the weather forecast for the latter part of this week shows little chance of snow across most of the region. The Thanksgiving travel period is defined as Wednesday to Sunday, but Tuesday was expected to be the busiest day at airports, an AAA Idaho news release said. Drivers are urged to avoid peak congestion on Tuesday afternoon and Wednesday, especially around metro areas such as Salt Lake City and Boise as holiday travelers share the road with the morning and evening commute

“This year’s travel volume is back to just below pre-pandemic levels, despite the challenge of higher prices for fuel and the other necessities to make it possible,” said Matthew Conde, AAA Idaho’s public affairs director, in the news release. “Clearly, people see family gatherings as an investment in their quality of life.”

Airports throughout the region are expecting one of the busiest travel seasons yet and Idaho Falls Regional Airport is no exception.

Idaho Falls airport officials are expecting more than 10,000 travelers coming in and out of the airport for the Thanksgiving travel period but they won’t know exact numbers until after the weekend.

“The flight schedules are pretty consistent throughout the year but there are a lot more people that fly around the country at this time of the year which can make the airport very busy,” said Eric Grossarth, Idaho Falls’ public information officer.

Idaho Falls airport staff are prepared for the influx of flyers. Earlier this year, the airport built an additional Transportation Security Administration screening area which brings extra security lines to help people get to their gate faster. It also added additional parking to the airport with the new economy lot, Grossarth said.

“Already this year, IDA airport has experienced record levels of passengers making their way through the premier airport for the region,” an airport news release said. “With the increased number of passengers and higher volumes of flights, travelers are encouraged to arrive at least two hours early for their flight to ensure enough time to get through the lines and not get left behind.”

Idaho Falls Regional Airport has already eclipsed its annual record for airport travelers as more than 500,000 people have made their way through security to date. That’s more than 50,000 over its previous record set just a year ago. Some of that increase came in the first half of the year as the Jackson Hole Airport was closed for three months for runway reconstruction.

“The airport ensured we took measures in our remodel to be well equipped for the increase in passengers, but it is always wise to plan ahead and get to the airport a little bit early,” Airport Director Rick Cloutier said in the release.

The Idaho Falls airport’s 2022 passenger totals are already up 12% over last year without the addition of holiday travelers.

Travelers flying out of Idaho Falls for the first time or those who haven’t done so in a while will see many changes beyond expanded parking and security lines. Once they make it through security, they will find an improved airport terminal with new restaurants. Additionally, the Idaho Falls Regional Airport Arts Program is offering live music in the terminal.

Airport officials recommend arriving two hours early, packing smartly and correctly and being patient as more travelers and staff fill the airport during the holiday season.

“A little kindness and some pre-planning will go a long way to helping make travel better for everyone,” Cloutier said in the release.