Since the 1980s, technology transfer has been part of the mission for the U.S. Department of Energy’s national laboratories. But while the concept seems simple – find ways to move lab-developed innovations into new products and services in private industry – it’s actually quite complex. On their way to market, technologies often reach what is called the “valley of death,” the point where a researcher or institution has developed a promising idea, has received funding through grants, and then runs out of cash to move the idea beyond the laboratory.

How much easier would it be if the private sector found investors and raised capital, leaving research scientists free to do what they do best? Idaho National Laboratory is on a new path of exploration, as it has executed multiple agreements with Innovyz USA, a Chicago-based company that works with universities and laboratories to find new technologies ready for commercialization.

“Our goal is to turn great ideas into great companies,” said Quentin Ebner, one of the company’s general managers.

INL is the first national laboratory to work with Innovyz USA, and so far, the relationship has resulted in three companies spun out from INL technologies. Novus Sentry, a battery diagnostic company, provides resources for rapid battery health testing and state of health measurement. CoDeAc Solutions enables security teams to accurately detect uranium and plutonium across a wide range of environmental conditions.

And the most recent, Fornax Advanced Materials, which is based on INL’s research and development in spark plasma sintering, a process used to develop advanced materials capable of withstanding harsh environments in energy, aerospace and defense applications.

The lab’s Technology Deployment team is eager to see what advanced materials Fornax develops commercially and how they’ll be used in the marketplace, INL Commercialization Manager Jon Cook said. In a broad sense, the market for advanced materials that can withstand extreme conditions is unlimited. Developing specific products and finding customers is a more nuanced undertaking, however, one that Fornax and INL intend to explore carefully.

INL has established itself as a leader in spark plasma sintering. High-performance technologies such as nuclear reactors, spacecraft, concentrated solar plants and hydrogen cells require advanced materials made from alloys that start out as powders. In the past, the powders would be poured into a die, subjected to high pressure, and slowly heated in a process called hot pressing. This method is energy intensive and produces high amounts of waste heat, making it too expensive to be used in manufacturing everyday items. 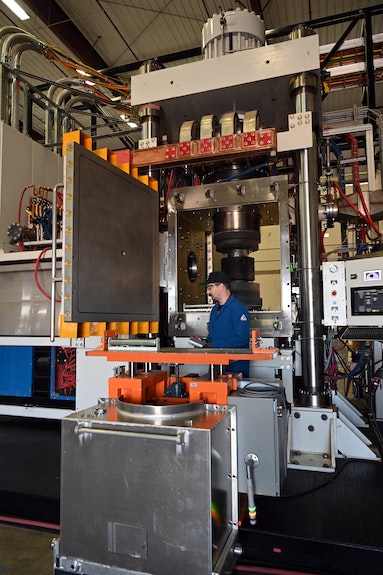 INL has designed and built four custom SPS machines that range from supporting small experiments on the bench-scale to industrial-scale, large-format, high-throughput systems.

With spark plasma sintering, electricity is conducted directly through the die and sometimes the material itself, fusing  the powdered metals, ceramics or a mixture of both to create much stronger materials while consuming less energy and producing less heat. INL has designed and built four custom spark plasma sintering machines that vary in size.

The relationship between INL and Fornax is based on two U.S. patents granted to INL in 2019, both detailing methods for forming silicon carbide, an exceedingly hard, synthetically produced crystalline compound of silicon and carbon. Silicon carbide is not new. It was first discovered in 1891 and has been used in sandpapers, grinding wheels and cutting tools. From those simple uses, it has been adapted for use in linings and heating elements for industrial furnaces, wear-resistant valves and gaskets in oil and gas drilling, and jet and rocket engines. 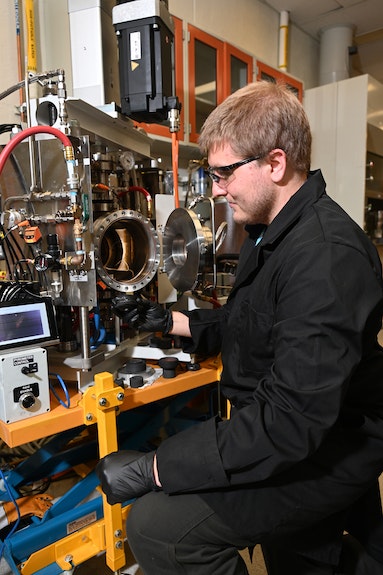 INL spark plasma sintering patents detail how specialized materials can be formed by pulsing current and heating powders up to 1,950°C.

The INL patents detail how specialized materials can be formed by pulsing current and heating powders up to 1,950°C. Using the same production methods, INL and Fornax are also exploring additional filings for the production of high-density graphite, which can be used to create high-performance parts capable of withstanding extreme environments while maintaining their strength and shape.

Innovyz has seen a positive reaction to the INL technology. “We continue to see interest from industry and investors,” Ebner said, adding that Innovyz’s involvement with INL could continue to expand. “INL is broadly doing a lot of work in spaces that are in Innovyz’s sweet spot.”

About Idaho National Laboratory
Battelle Energy Alliance manages INL for the U.S. Department of Energy’s Office of Nuclear Energy. INL is the nation’s center for nuclear energy research and development, and also performs research in each of DOE’s strategic goal areas: energy, national security, science and the environment. For more information, visit www.inl.gov. Follow us on social media: Twitter, Facebook, Instagram and LinkedIn.