Meuleman, director of intergovernmental affairs for Gov. Brad Little, introduced her boss, who was not on the agenda, but showed up with a surprise for LINE Co-Chair Mark Peters.

Appearing remotely from the Idaho Statehouse, Little, himself a former LINE co-chairman, praised the commission, which began under his predecessor, former Gov. C.L. “Butch” Otter, for expanding knowledge about Idaho National Laboratory across the state. 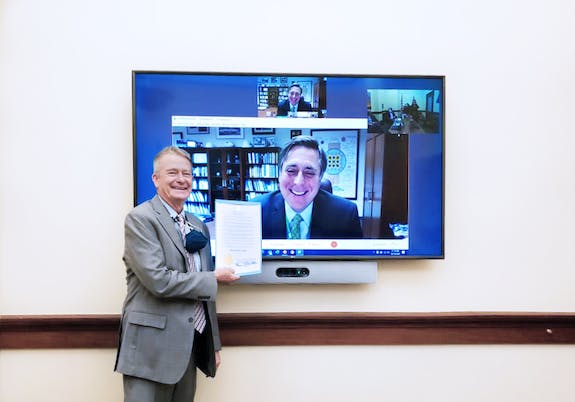 As Little read his proclamation, Peters sat smiling in his office. When Little concluded, the two men shared this exchange:

“Thank you, governor. I never thought I would have a day.”

Peters became INL director on Oct. 1, 2015. He has accepted a job with Battelle and will leave INL once his replacement is hired and in place.

Peters does plan to continue serving on the LINE Commission after leaving INL. Still, his departure from the laboratory was on the minds of those who participated in Wednesday’s meeting.

Rep. Mike Simpson said some lab directors are technical while others excel at politics. Rare, Simpson said, is the director who can wear both hats.

“Mark is good at both of them,” Simpson told the LINE Commission. “He’s well respected across the laboratory complex. We’ve been fortunate to have him as lab director and Battelle Energy Alliance as the main contractor for the site.”

“Mark, it’s been a really sincere delight to work with you,” she said. “I can’t believe that five years went by so fast.”

Other discussions during the meeting included: Simpson speaking about the need for a federal repository; Baranwal praising INL, where she formerly worked as director of the Gateway for Accelerated Innovation in Nuclear (GAIN) initiative; Svinicki’s poignant description of how nuclear energy could change the world by bringing power to the more than 1 billion people currently living without; and Hunter talking about how UAMPS’ small modular reactor could help mitigate the effects of climate change while heading off the kinds of power outages experienced in California this year.

Perhaps because of Peters’ imminent departure, those who have been around a while reminisced about how far INL has come toward gaining bipartisan support for its clean energy and national security missions.

THE OFFICE OF THE GOVERNOR PROCLAMATION

WHEREAS, On Oct. 1, 2015, Dr. Mark Peters became director at Idaho National Laboratory; and

WHEREAS, Dr. Peters has accepted a job with Battelle Memorial Institute and will soon leave Idaho; and

WHEREAS, Dr. Peters’ tenure at INL has featured an expansion of its workforce and infrastructure, both on the INL desert Site and the laboratory’s Idaho Falls campus; and

WHEREAS, Dr. Peters was a critical part of the coalition that featured the State of Idaho and our colleges and universities, and which led to the construction and opening of the Cybercore Integration Center and Collaborative Computing Center; and

WHEREAS, INL last fall was chosen by the U.S. Department of Energy to host the National Reactor Innovation Center (NRIC), a designation that will benefit INL, the nuclear energy industry, and the State of Idaho for decades to come; and

WHEREAS, INL, under the direction of Dr. Peters, has expanded its vital national and homeland security work, and its broader clean energy research, including partnerships with Idaho agriculture to convert waste products into usable energy; and

WHEREAS, INL under Dr. Peters, has prioritized Idaho students’ vital access to STEM education programs and opportunities to be a part of the future clean energy workforce; and

WHEREAS, Dr. Peters has co-chaired the Governor’s Leadership in Nuclear Energy (LINE) Commission; and

WHEREAS, Dr. Peters and his wife, Ann Marie, have been active in community affairs, including education and the arts;

NOW THEREFORE, I, Brad Little, Governor of the state of Idaho, do hereby proclaim October 14, 2020 to be 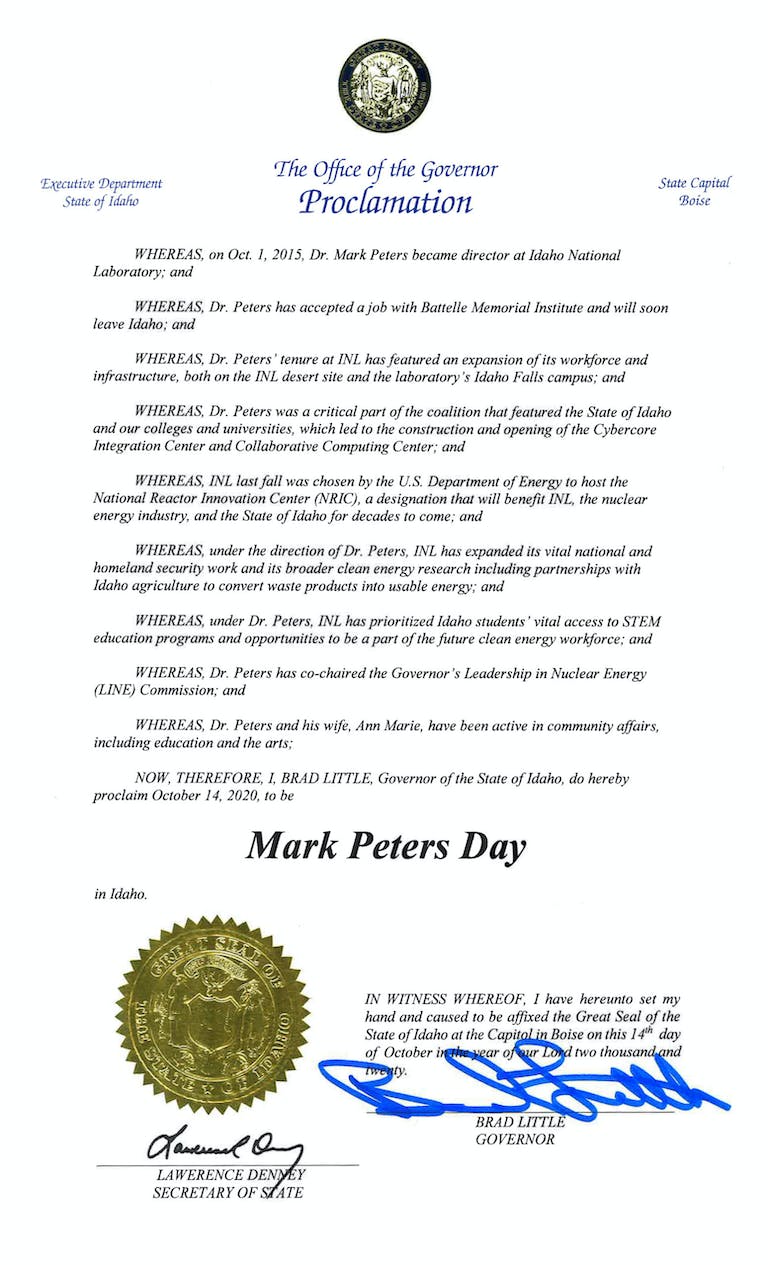